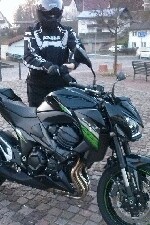 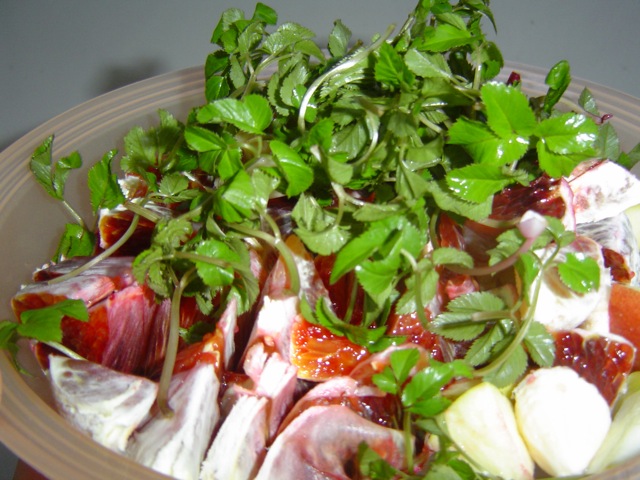 Bring your own fruit and vegetables 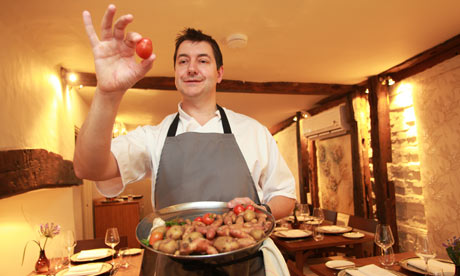 Chef Laurie Gear at the Artichoke restaurant in Amersham, with homegrown produce brought in by a cusomer. Photograph: Frank Baron

What can you get for a handful of knobbly potatoes and a few mutant baby tomatoes? These are the last remnants of our vegetable patch. They might not look like much but they have been grown with love by my husband, who has parted with them under duress. I am taking them to barter at Artichoke, a restaurant in Amersham, Buckinghamshire where chef Laurie Gear encourages locals to bring in their beautiful produce in return for a free glass of wine, and the privilege of seeing their vegetables transformed into cutting-edge cuisine (which is not free).

On arrival, I quickly realise I'm way out of my league. Gear's regulars hand over prizeworthy pumpkins, squashes, wild garlic, curly kale, rosemary and mint. One even donates game from the local shoot: "His wife does not like to cook pheasant," explains Gear, frowning at my paltry haul.

"There has to be traceability," he says, looking at me doubtfully, "I wouldn't accept something if I didn't know the person." Barter is clearly a tricky, subjective business. But in these recessional times it is becoming something of a trend. Earlier this year a Norfolk pub, The Pigs, in Edgefield near Holt in Norfolk, announced it was offering pints in return for locally sourced food to serve. It also welcomes game, pigeons and crayfish. And The Old Stag Inn in Llangernyw, Conwy, north Wales, will also accept customers' homegrown produce at the bar.

At The Marksman Pub in Shoreditch, east London, you can "barter for a starter" with goods or services. Its website carries a list of desired items ranging from allotment produce, fresh-cut lilies or a bag of coffee beans to a Phillips screwdriver set. The pub also needs to get its piano tuned and the windows cleaned. "See if you can get a beer out of us," writes landlady Dawn Kolper, "but please remember that this is not an 'everybody wins' type of game. We have been known to refuse offers."

Evidently, they don't take any old rubbish at Artichoke either. The three-course a la carte menu here costs £38. And critics love the place ("Every mouthful is a joy," says Fay Maschler. "A smart outfit," says Jay Rayner).

This week Kim Rowland, a full-time mum, brought in a bucket of jerusalem artichokes from her allotment. "We just ask them if they want any because there's only so much you can eat. We've given runner beans, turnips, lettuces and cucumbers too."

This week's contribution goes straight into one of Gear's signature dishes: jerusalem artichoke mousse with hazelnut sponge, brown butter sorbet and toasted hazelnuts. Another customer's apples have just gone into the chutney to accompany a game pie. And the pumpkins were transformed into a pumpkin creme brulee with fennel. Rowland's beetroot once even headlined the tasting menu as a sorbet (with goat's cheese, lemon thyme and rye bread).

Gear says there's no real financial benefit from using donated produce. "It's just something we can do because we're a local, neighbourhood restaurant," he explains.

As for the customers, says Rowland: "We just get a lot of pleasure out of growing stuff and it's a shame to see it not used up."

The informal bartering started some years ago when one regular had a glut of vegetables. But since the restaurant reopened this year after a fire, Gear has become even more passionate about using local produce. During the enforced sabbatical caused by the fire, he visited Noma in Copenhagen (recently ranked as third-best restaurant in the world), where the sous-chef is also a forager and the ethos is about getting the flavour of the local land into the dishes. "It's not about being clever for clever's sake," he says, "That's just peeing in the wind. It's about wanting to do something a bit different." Gear grew up on a council estate in Lyme Regis, Dorset, and foraged for hazelnuts with his father as a child. He first made elderflower champagne at the age of 13. Next spring he plans to take his whole cooking team foraging for wild sorrel, mushrooms, elderberries and cobnuts.

So what do I get for my meagre handful of produce? A cup of coffee and a look of pity. But here, the barter is not so much about what you get in return. It's about the thrill of seeing your produce in the hands of someone with a Michelin star in their sights. As I'm leaving, Gear gives my potatoes a second look. "Maybe I can take those off your hands." I blush with pride.